ITS Bar Skills have the pleasure of utilising the facilities of some of Queensland’s most iconic and Historic venues for our Bar Skills, RSA and RMLV training courses. The Southport Yacht club is one such venue at which our staff and students thoroughly enjoy conducting their training.

SYC is an impressive award-winning venue, taking home gold for “best social club” in the 2019 Clubs Queensland Awards for Excellence. Featuring a newly refurbished clubhouse with a waterfront restaurant, several bars and two large function rooms capturing the gorgeous views of the broadwater and the club’s stunning 300 yacht Marina.

The new 4shore bar on the Quarter Deck is apparently the only North-facing bar on the water in the Gold Coast where you can witness the spectacular sunsets. Known and loved worldwide for their exceptional boating facilities and exclusive waterfront dining, the club has been growing from strength to strength for over 70 years following its official establishment in 1946.

History of the Southport Yacht Club

The first recorded Broadwater sailing club was formed in 1810 by four prominent Southport residents who staged races amongst themselves, and were occasionally joined by visiting yachtsmen. These, and other organised regattas formed the idea of a yacht club; but due to the treacherous nature of the local waters, the lives of three crew were claimed, and it would be many years before a yacht club would be officially formed.

According to a feature penned by Andy Cancachian, “70 Years of Southport Yacht Club”, in 1897 a Southport Easter Regatta began, and became the catalyst for the Southport social life in the early 20th Century. By the 1940’s the Broadwater was a buzz with recreational and commercial vessels, including the Brisbane yachting fraternity.

During World War II, a group of local boaties offered sailing trips and picnics to injured returned serviceman as a mode of rehabilitation. These boat owners would eventually go on to become the founding members of the Southport Yacht Club. Never could they have imagined the club and its facilities would develop into a multi-million dollar business enterprise and multi-purpose boating mecca.

On April 5th, 1946 – approx 136 years after the idea was first considered, the Southport Mayor chaired a meeting of approx 70 people, and after much discussion the Southport Yacht Club was officially formed.

The Southport bar clams more wrecked vessels than any other bar in the world. Almost weekly there was a new boating disaster, and the experienced yacht club members were frequently asked to assist visiting vessels in their safe crossing. The club’s main objectives were to:

​Fortunately many early members would feature prominently in the management development of the Gold Coast, which surely contributed to Town Planner and architect Dr Karl Langer including a site for the clubhouse in the planning of the Main Beach Precinct. Arguably the best site along the whole broadwater. The rest is a long and colourful history!

By 1967 QLD was becoming one of the largest recreational boating hubs in the country with impressive numbers of overseas and interstate guests helping keep the Club current in its thinking. It was onwards and upwards for SYC.

In 1976 the “Ladies Auxiliary” was formed and granted an associate membership. A slipway was built with a waiting list of interested boaties. The floating marina was constructed and continually expanded to meet demand. New facilities and amenities were built at Hollywell and junior facilities developed.

1993 saw the introduction of poker machines to boost operating funds and in the same year the club was successful in a $2.5 million bid to have the Gold Coast made the Australian training base for our America’s Cup teams: OneAustralia and Sydney 95. This resulted in a significant membership boost, a large L shaped floating marina and upwards of $300,000 for the club.

Today the SYC hosts over 500 boat races annually, employs over 80 staff, receives more than 100,000 visitors a year and reports over 3,000 members. The floating marina sports 300 berths with 10 SuperYacht berths, and welcome between 500 and 800 visiting vessels per year. A stunning representation of the hard work and vision of volunteers and the community over it’s rich 73 year history. 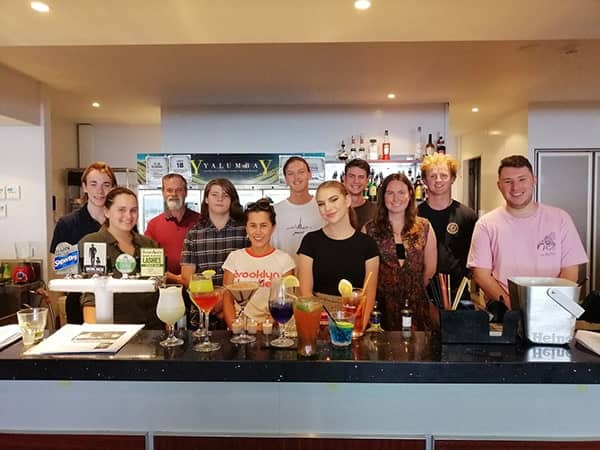 We would like to thank the staff and members at the SYC for always being so welcoming and accommodating to our team and students. The facilities are first class and the perfect environment for our groups to get hands-on practical training…IF they can take their eyes off that VIEW!